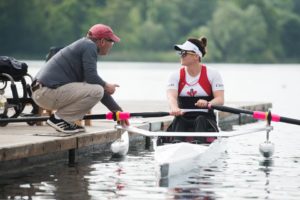 Two BC athletes went to Italy as part of the Canadian para group competing in the Gavirate International Para Rowing Regatta. This is an important event on the international para rowing calendar, and many of the best athletes from around the world were competing. Held on the picturesque Lake Varese, racing was held over 3 days from May 11-13.

All Paralympic classifications were represented in the group headed up by RCA Para Lead Coach John Wetzstein and supported by RCA Next Gen Para-Rowing Lead Kayla Cornale.

We had a chance to connect with Kyle about his experience. 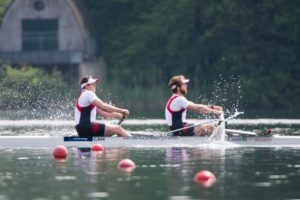 Kyle first started rowing almost 10 years ago in the summer before Grade 4 in a summer camp with Justin Fryer on Quamichan Lake. At first it was just something for him to do in the summer. Kyle became domestically classified in Grade 10 and looked at the National Team as an option, but it didn’t become a main goal until his first year at UVIC.

When asked about his experience at the Gavirate Regatta Kyle said “The best moment for me was when we crossed the finish line first in the second round of the regatta claiming the double gold. Even to today it feels surreal.”

The next step is getting right back to full tilt training and trying to remain on top for the next international showing and preparation for Speed Orders!

Rowing BC sends our collective congratulations to Tracy, Jeremy, Kyle and Andrew!