Rowing BC is pleased to announce that Executive Director, David Calder, will be inducted into the Greater Victoria Sports Hall of Fame this October. 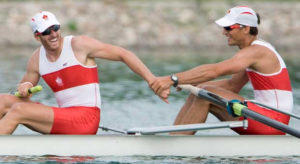 David has rowed for 20 years and has raced on three continents, in 14 countries and at over 40 international competitions. He has won nine National Championship titles, nine World Cup medals, and three World Championship titles. Representing Canada in four consecutive Olympic Games, beginning with Sydney 2000, he won the silver medal in men’s coxless pairs (with Scott Frandsen) in 2008 in Beijing. He went on to manage the St. Michaels University School Rowing Centre and the Gorge Narrows Rowing Club before becoming Executive Director of Rowing BC in 2017.

The 2018 inductees will be honoured at the annual Induction Ceremony and Dinner scheduled for Saturday, Oct. 27 at the Westin Bear Mountain. Come out and celebrate David and the other inductees. Tickets are available here.

Check out David’s interview with CHEK News following the announcement.