Off the Beaten Track: Rowing to Alaska

Coastal rowing is getting a lot of hype with the recent announcement of the World Coastal Rowing Championships coming to Sidney, BC in October 2018.

For Rowing BC Board Member, Janice Mason, the idea of coastal rowing in BC is nothing new. 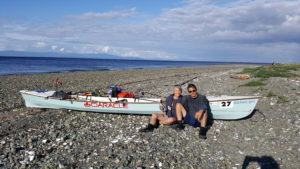 Janice is a well-experienced rower. On the flatwater side of rowing, she was named to the Canadian Olympic Team in 1980 and 1984. She has also been honoured by UVIC in their Sports Hall of Fame for her success in the sport of rowing. With regard to ocean rowing, she first got involved in the early 1990s rowing in Maas boats (Aero and Maas 24), taking trips from Sidney around James Island, and amongst the southern Gulf Islands. Her first overnight trip was in a custom-built rowboat made by fellow rower, Keith Battersby, that she loaded with camping gear and her eight year old daughter for a three hour trip from Galiano Island to Saturna Island. In 2017, she rowed from Port Townsend, WA to Ketchikan, AK via Victoria, BC in the three-week, 750 mile, non-motorized Race to Alaska (R2AK).

We had the chance to catch up with Janice to find out more about this intense trip.

How did you initially get the idea of doing this race to Alaska in a rowing shell?

“One of my dreams has been to row around Vancouver Island, thus when I heard about the first R2AK in 2015 I wanted to do the event by rowing. I asked around at the club in Victoria, looking for a partner, however was unsuccessful in finding anyone who would do it. For 2015 I was a spectator, ‘watching’ the race via computer. In 2016 I was able to get on board Sistership for R2AK – we were 4 women over the age of 50 on a trimaran equipped with rowing stations on the amas – our propulsion for times of no wind (rowing a 3000 lbs boat is a pretty hard thing to do). The race was amazing but I wanted to experience more of the coast, thus keen to row as that had been my first interest in the race. The boat we used had been rowed from Ketchikan to Bellingham in 2007 thus we knew it was seaworthy and capable of the journey.”

Had you done any similar long-distance rowing trips before?

“No other long-distance rowing trips; I had done some 5-6 day kayaking trips, but they were much more leisurely!”

What was the highlight of your journey?

“Our amazing coast, living outdoors for three weeks and completing the journey still best of friends with my rowing partner.”

What was the hardest aspect of your journey?

“That’s a tough question as there are so many challenging aspects to a trip like this, such as:

“Again – yes! Planning to do the Race to Alaska in 2018 … for something different (for us), this time by double kayak – it will be nice to face in the direction that we are going.” 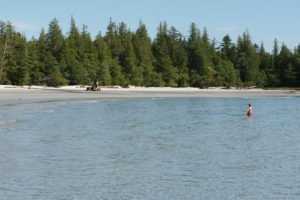 Why would you suggest Coastal rowing to others?

“Coastal rowing is a fantastic way to enjoy rowing in our vast, open, beautiful environment. One can experience such a variety of conditions that you would never get out into in a racing shell. The boats are much more stable thus more relaxing for new rowers (less tippy) and even fun for us old experienced rowers whose joints aren’t quite as mobile as when young.”

How could the idea of Coastal rowing be grown more across BC?

“Coastal rowing – opens up opportunities for rowing in many more communities – not just for those with great flatwater rowing, also for those on the ocean, large lakes, windier lakes, and rivers – anywhere there is water, especially where the water may be a bit more challenging to row. Helping communities/clubs to have access to coastal boats will allow clubs a chance to try it and see potential and opportunity. Coastal boats make great ‘learn to row’ boats – they have increased stability thus greater ease for novice rowers to learn the basics.”

Just a few interview questions really doesn’t do the experience of this trip justice. Janice’s 2017 R2AK team are featured in an additional article from the race organizers here. Their full team website with photos and videos along the three week journey can be enjoyed here.