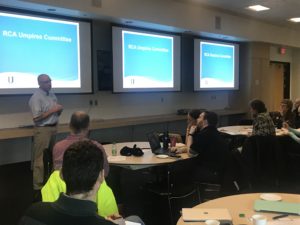 Outstanding athletes and coaches get a lot of attention, but what about the rest of the support system that makes the BC rowing community strong?

Did you know that from the 54 active umpires in BC, 530 umpire regatta days were filled throughout 2017? That means on average each umpire volunteered 9.5 days to ensure our regatta system could function in a safe and fair way.

In the recently released 2018-2021 Rowing BC Strategic Plan, one of the strategic directions is to support a healthy athlete-centered rowing system. We realize that to support a healthy athlete-centered rowing system, we need to license more umpires. This includes resourcing and retaining the umpires already in the system, while also recruiting new volunteers to join the umpire community. Rowing BC will be working with our 40+ member organizations to find ways to recruit and engage new umpires across the province during 2018. Adding new members to the umpiring team helps to spread the load and ensure individuals are not over-taxed by the time commitment of their role as an umpire. New umpire training is available throughout the year to individuals of any age! The process to getting involved is easier than you would expect and prioritizes hands-on experience in the roles of an umpire. Find out more here.

Although there is a need for more umpires, it should be recognized that the umpires currently in the system  are incredibly talented and dedicated. In January alone, four individuals took part in a New Umpire Clinic, thirty five of BC’s umpire team participated in the Annual Umpire Recertification Seminar, and all Chief Umpires were updated on the new guidelines for being a Chief Umpire at regattas in Canada.

Umpire Clinicians are a vital component to the health of the overall umpire system. Clinicians host workshops, mentor new umpires, administer examinations and provide feedback to RCA. The passing of Sam Fisher is an incredible loss to the umpire community in BC. As a friend, umpire, and clinician, Sam leaves big shoes to fill. Debbie Sage’s nomination to be an Umpire Clinican on Vancouver Island was ratified by the RCA Umpire Committee in early 2018. Debbie will now become the latest addition to the Umpire Clinician Team in BC, and Rowing BC wishes her well.

At the 2018 Annual Umpire Recertification Seminar, six new umpires officially graduated from their training and were awarded their certification, flags, hat, tie and rule book in front of their peers. 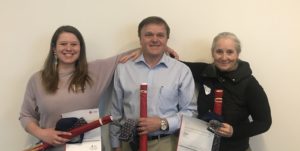 We had a chance to virtually sit down and find out a little more about these new umpires, and get a glimpse into the world of umpiring through their eyes.

When did you first get involved in rowing?

Brooklea – I first got involved in rowing in 1997 when I joined the rowing team at Stellys’ Secondary School. I rowed for Stellys’ all through high school and rowed at VCRC during the club season. I stopped when I graduated in 2001 and got back into rowing through Corporate Challenge in 2015.

Jane – Four of my six children have rowed or are rowers. My dad rows as well.

Dan – In the spring of 2016, I was introduced to the Rowing BC Umpiring world through a friend and co-worker, Larry Jacobs, who invited me to watch a Spring Regatta on Shawnigan Lake. The enthusiasm and dedication from the Umpires was remarkable and the events so well coordinated. Shortly after I signed up for a “Learn to Row” program in Maple Bay with my 15 year old son.

What made you curious about wanting to try umpiring?

B – I wanted to be involved in the sport as much as possible but I found that I wasn’t really cut out for coaching. Once I realized that, I went looking for other ways to get involved and that led me to umpiring.

J – I thought it would be the best way to get that perfect photo shot of my kids rowing.

What has been your best umpiring experience so far?

B – At the regatta at Lake Quamichan last year, I was being mentored and we had an incident we needed to address with some kids who were upset about losing a race. [My mentor] handled it so well and said to me “remember, we want them to keep rowing”. That moment has really stuck with me because it made me realize that we umpires play a pivotal role in the development of young athletes.

J – The day I got to splash my kid in his boat, while he was waiting to row, and he couldn’t do a thing about it.

D – It would have to be the 2017 Maple Bay Quamichan Lake Regatta.  I just like the venue and it’s home base.

Why would you suggest that others try umpiring?

B – It has made me a better rower by giving me a thorough understanding of the rules and regulations of the sport.

J – The days go by fast, it’s outside, and there’s lots to learn. You are around keen athletes and you meet a lot of people.

D – I often have this discussion with friends asking about the long days… The answer:  It is an excellent way to be involved in the sport, working with a great bunch of volunteers.

What is your favourite aspect about the sport of rowing overall?

B – It’s very inclusive to all different body types and abilities. It has really helped me become more comfortable with my body because my size gives me strength and power. A lot of people come to this sport later in life; some from other sports and some who have never participated in a sport before. At any given practice, I could be in a boat with a marathon runner, a basketball player, or a water polo player and we all bring something different to the boat. It’s amazing!

J – It’s a very complicated sport, both from a technical side but also with regards to the rules of racing.

D –  It is simply a beautiful sport that recognizes  team spirit and it is an exciting outdoor activity.  There is a class and category for everyone.

What’s something neat about you that few other people would know?

J – I am a trained sommelier and I was a ski patroller.

Thank you to all of our umpires for the support they give to rowing in BC!

Off the Beaten Track: Rowing to Alaska

Off the Beaten Track: Rowing to Alaska Coastal rowing is getting a lot of hype…

Sport BC 51st Annual Athlete of the Year Awards